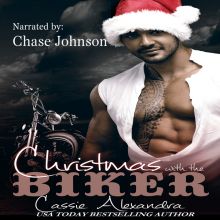 From USA Today best-selling author of The Biker Series comes a sexy, holiday story to get your motor revving.Meet Dodger, the newest prospect of the Gold Vipers... and long, lost half-brother to Raptor and Jordan Steele (The Judge).Cocky and arrogant, just like his siblings, he doesn't much like doing the grunt work expected out of him, but willing to do what it takes to prove his worthiness to the club. Even during Christmas, which isn't exactly his favorite time of the year. Amused by his Scrooginess, Raptor puts him in charge of collecting holiday donations and dressing up as Santa Claus for several biker events, which doesn't exactly thrill Dodger.Chloe Wilson loves the holidays and happily volunteers to help the Gold Vipers collect toys and raise money for the homeless. Until, that is, she is thrown together with Dodger, the grumpy biker who has about as much Christmas spirit as a deflated football. The two clash, at first, but then holiday magic catches up with them when they get trapped in a horrible blizzard together.No cheating and HEA.**This book is intended for listeners 18 years old or older due to the explicit language, sexual situations, and violence that may be upsetting to some listeners. This is a work of fiction and is not meant to be a true depiction of a motorcycle club. It was written for entertainment only. 1. Language: English. Narrator: Chase Johnson. Audio sample: http://samples.audible.de/bk/acx0/127967/bk_acx0_127967_sample.mp3. Digital audiobook in aax. 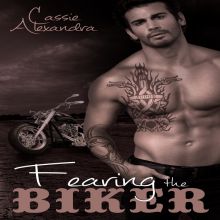 Jordan Steele (The Judge) has been hired as a bodyguard for Jessica Winters, Slammer's new step-daughter. Security is usually not his thing, but he finds himself unable to refuse the offer after meeting her in person. Jessica Winters wants nothing to do with The Judge, or any other biker for that matter, especially after being raped by one of the Devil's Rangers three years before. When she learns that her life is in imminent danger, however, she reluctantly agrees and finds herself in the care of a man who makes her tremble in more ways than one. This book is intended for listeners ages 18 or older due to explicit language, sexual situations, and violence. This is a work of fiction and is not meant to be a true depiction of a motorcycle club. It was written for entertainment only. It can be heard as a standalone but will be more enjoyable if you first listen to the previous two books in the series (to learn more about the characters). 1. Language: English. Narrator: Nikki Diamond. Audio sample: http://samples.audible.de/bk/acx0/049314/bk_acx0_049314_sample.mp3. Digital audiobook in aax. 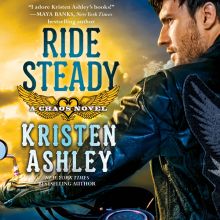 The ride of her life.... Once upon a time, Carissa Teodoro believed in happy endings. Money, marriage, motherhood: everything came easy - until she woke up to the ugly truth about her Prince Charming. Now a struggling, single mom and stranded by a flat tire, Carissa's pondering her mistakes when a vaguely familiar knight rides to her rescue on a ton of horsepower. Climb on and hold tight.... In high school, Carson Steele was a bad boy loner who put Carissa on a pedestal where she stayed far beyond his reach. Today, he's the hard-bodied biker known only as Joker, and from the way Carissa's acting, it's clear she's falling fast. While catching her is irresistible, knowing what to do with her is a different story. A good girl like Carissa is the least likely fit with the Chaos Motorcycle Club. Too bad holding back is so damned hard. Now, as Joker's secrets are revealed and an outside threat endangers the club, Joker must decide whether to ride steady with Carissa - or ride away forever.... 1. Language: English. Narrator: Kate Russell. Audio sample: http://samples.audible.de/bk/hach/002127/bk_hach_002127_sample.mp3. Digital audiobook in aax.